Oven Racks in stock and ready to ship!

Are you in need of doughnut racks to help you prepare for the first National Doughnut Day of the year? Shop these industry tested doughnut racks now! 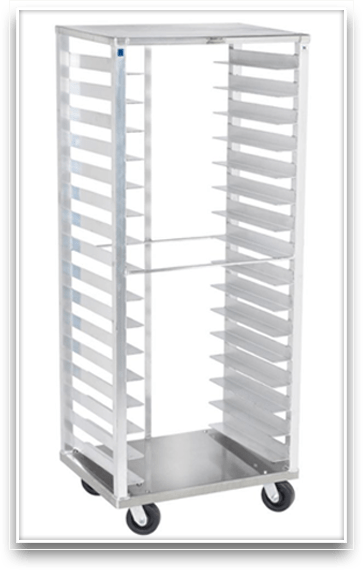 This doughnut rack offers many features that makes it high quality and a beneficial addition to your commercial bakery.

Adding this doughnut rack to your bakery will increase the amount of rack space for your doughnuts! The high quality rack is perfect for transporting your doughnut baskets or screens from the commissary to the store!

Our SHOPCraft Doughnut Screen Rack is the perfect addition to your commercial bakery, allowing for the storage and transportation of a high volume of doughnuts on one quality made rack! Some of the features include:

This doughnut screen rack can help you keep the doughnuts flowing and production levels high! With the ability to hold a ton of doughnuts, this screen rack can enhance and improve your bakery! 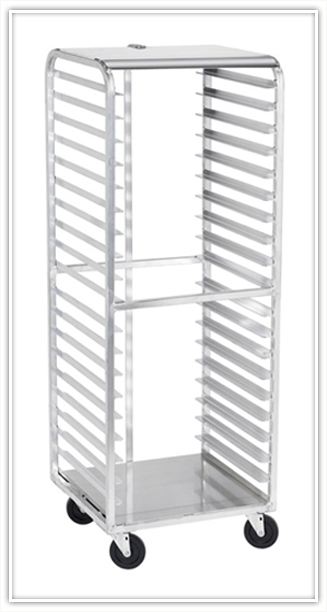 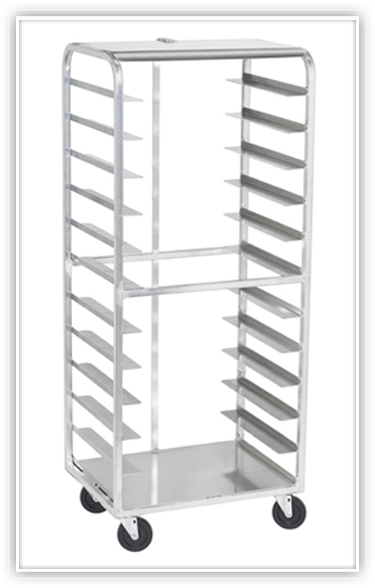 Our SHOPCraft Donut Basket Rack can help transport doughnuts from your commercial kitchen to the store. Since we make our own bakery racks and equipment, you can customized these basket racks to get the perfect style for you. These racks can be ordered with a various number of shelf levels or multiple configurations for different products.

The features offered by this rack includes:

This doughnut basket rack can help you transport your bakery’s doughnuts to different stores easily. Add this rack to your bakery for an easy and organized doughnut transportation method!

Running a bakery efficiently is not only important on National Doughnut Days and other pastry holidays, it is a daily task that requires the best equipment and bakery racks to do properly. Schaumburg Specialties makes high quality racks and bakery equipment that can help your commercial bakery stay organized, run smoother, and keep those doughnuts prepared for the busiest days!

Make transporting your doughnuts easier with this doughnut basket or doughnut screen dolly. This dolly makes it possible to stack and transport doughnuts easily throughout your bakery or commercial kitchen. An organized and easy transportation method can make your bakery easier to navigate and allow you to properly prepare for National Doughnut Day and every day in between!

This doughnut basket dolly offers many features that can help you keep your doughnut production running smoothly!

This dolly is made with stainless steel tubing and has caster mounting plates welded to the bottom of each corner, which strengthens that base of the dolly. 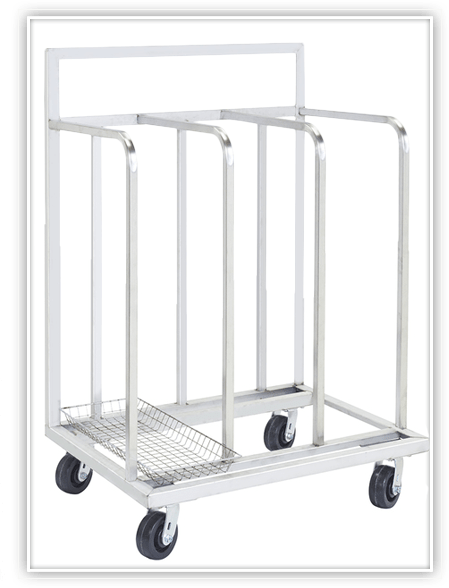 Donut Go Into The Day Unprepared

The Deal With Doughnuts

Doughnuts, which can also be spelled donuts, are a delicious treat that many people work hard to avoid. But the truth is, we love these fluffy, sweet, and tasty pastries. In the U.S. alone, over ten billion doughnuts are made each year. It is safe to say that these treats are a popular choice among people of all ages.

Did you know that there are two National Doughnut Days? One is the first Friday in June and the other is November 5th, so you can celebrate these sweet treats and expect the bakeries and customers in the area to do the same. Preparing your bakery for National Doughnut Day, twice a year, as well as making enough doughnuts each day to satisfy the sweet-toothed people in your area, can be a challenge. Having the right equipment to mass produce these ring shaped pastries can help you keep up on both National doughnut Days and every day in between!

And in case you were wondering or felt that there needed to be more doughnut days of some kind, you can look forward to a few more days that are focused on these breakfast pastries. On January 12th, you can celebrate a doughnut classic, this is National Glazed Doughnut Day. And on June 8th, add some jam to your doughnuts to celebrate National Jelly Filled Doughnut Day. Let’s not forget about National Cream-Filled Doughnut Day, celebrated on September 14th.The doughnut lovers donut rest, so why should your bakery?

When you use Schaumburg Specialties to provide your commercial doughnut baking racks, basket racks, and screen dollies, you can rest assured that you will be ready for these sugar filled holidays. Having the right equipment can make all the difference, help your bakery run smoothly and produce enough of the good stuff, and our doughnut products can help! All of our bakery racks and equipment are made by our experts, here at Schaumburg Specialties. We work hard to ensure all of our products are made with the highest quality material and are built to last. Our goal is to make the best bakery racks and equipment to help your commercial or local bakery run smoother, stay organized, and become more productive! 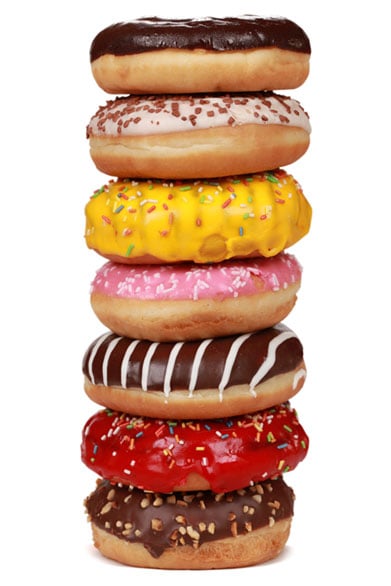 At Schaumburg Specialties, we know how to work hard and play hard. We make all of our products and bakery equipment to help your bakery thrive, after shopping for your new doughnut racks, learn some more fun and interesting facts about doughnuts! These can help make your doughnut business have even more meaning and give you some fun conversation starters.

All fun facts must start with a history. The history of doughnuts is slightly unclear, but there are some things we do know about this tasty little pastry. Modern doughnuts made their way to America back when Manhattan was called New Amsterdam. The Dutch introduced them as olykoeks, which literally means “oily cakes.” This appearance happened in the early 18th century and by the 19th century, doughnuts were viewed as an American food and looked more like the doughnuts we are used to today.

A doughnut history from Smithsonian.com takes a closer look at how we got the modern doughnuts we are used to today. A sailor named Hanson Gregory claimed to be the inventor of the ringed doughnut shape. Gregory’s mother, Elizabeth Gregory, would make her son tasty treats of deep-fried dough, flavored with nutmeg and cinnamon, for his voyages. Legend has it that Mrs. Gregory would put hazelnuts or walnuts in the center, where the dough did not cook through. Perhaps this is where they got the name “doughnuts.”

There are many thoughts as to how Captain Gregory put the holes in the doughnut. Some though that he did so to stint on ingredients and others figured that he thought the hole would help make them easier to digest. Our personal favorite is that at some point he needed two hands on the ship’s wheel, so he punctured the doughnut with the spoke of the wheel, leaving a hole. Captain Gregory put an end to the rumors, 50 years later, in an interview with the Boston Post, stating that he used the top of a round tin pepper box to cut a hole in the middle of the doughnut! And there you have it, the creation of the modern day doughnut!

It all started with World War I and the Salvation Army, when “Donut Girls” or “Donut Lassies” were born. During WWI and WWII, these ladies served along the front line with the soldiers, offering them doughnuts and coffee. National Doughnut Day was started in Chicago in 1938 to home the Salvation Army Donut Girls, and to this day it is celebrated as an unofficial holiday on the first Friday in June.

When the Salvation Army started in 1917 as a way to help support the U.S soldiers, as well as to raise funds and awareness of the organization's work, they sent 250 volunteers overseas to set up huts and hand out clothes, supplies, and baked goods to soldiers. They soon discovered that serving baked goods was difficult due to the condition of the huts and limited rations. That is when Ensign Margaret Sheldon and Adjutant Helen Purviance started to fry doughnuts in soldiers’ helmets, which fit seven doughnuts at a time. The women who served doughnuts to soldiers were given credit for popularizing doughnuts in the U.S. when the troops, who were nicknamed “doughboys” returned home.

Donut Leave Before Reading These Facts! Enough with the history. While doughnuts do have a fascinating past, there are many other fun facts about doughnuts that will help you wake up every morning excited to start your doughnut baking routine! Just be sure you have the right equipment

Prepare For The Daily Doughnut Takeover

There are world records for everything, including doughnut weight and doughnut eating. A Guinness World Record for the fastest time to eat a jelly-filled doughnut is one of those records, the time to beat being 33 seconds.

Shamus Petherick, an Australian man, set a record for eating the most powdered doughnuts in three minutes, being six powdery treats.

Krispy Kreme holds a world record for largest box of doughnuts, weighing 297 pounds 10 ounces. The box was 19 feet 4 inches long, 13 feet 5 inches wide, and 2 feet 10 inches deep. This giant box was an exact replica of the actual Krispy Kreme doughnut boxes and was filled with 2,700 doughnuts.

In 1981, John Haight set the world record for doughnut eating when he ate 29 doughnuts in just over six minutes.

As of 2011, ten people in the U.S. were lucky enough to have the last name of Doughnut or Donut. While they may have changed their last name to Doughnut, it makes it obvious that they have a strange but understandable connection to these tasty pastries. Donut was also recorded as 13 people's first names, they are likely the people who are in doughnut shops on a daily basis.

While Canada produces way fewer doughnuts than the United States, they have the most doughnut shops per capita than any other country!

While many people donut think about doughnuts on a regular basis, we know you do! You own a bakery, whether it is a commercial bakery or a local bakery, and doughnuts are part of your daily routine! With two National Doughnut Days plus other days dedicated to different doughnut types, it is easy to be consumed by this sweet treat. But when you shop the doughnut rack collection from Schaumburg Specialties, you can keep your doughnut production running smoothly. Make sure you are prepared for all of the doughnut holidays, start shopping now!